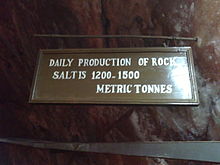 Estimates of the total reserves of salt in the mines range from 82 million tons to 600 million tons. In raw form it contains negligible amounts of Calcium, Magnesium, Potassium, Sulphates and moisture, with Iron, Zinc, Copper, Manganese, Chromium and Lead as trace elements. Salt from Khewra, also known as Himalayan salt, is red, pink, off-white or transparent. In the early years of British rule, the Khewra mine produced about 28,000 to 30,000 tons per annum; it increased to about 187,400 tons per annum for the five fiscal years ending 1946–7 and to 136,824 tons for the two years ending 1949–50 with the systematic working introduced by Dr H. Warth. The mine's output was reported in 2003 to be 385,000 tons of salt per annum, which amounts to almost half of Pakistan's total production of rock salt. At that rate of output, the tunnel would be expected to last for another 350 years.

The mine comprises nineteen stories, of which eleven are below ground. From the entrance, the mine extends about 730 meters (2440 ft) into the mountains, and the total length of its tunnels is about 40 km (25 miles). Quarrying is done using the room and pillar method, mining only half of the salt and leaving the remaining half to support what is above. The temperature inside the mine remains about 18–20 °C (64–68 °F) throughout the year. The 2 ft (610 mm) narrow gauge Khewra Salt Mines Railway track laid during the British era is used to bring salt out of the mine in rail cars.

Himalayan salt is Pakistan's best known rock salt. It is used for cooking, as bath salt, as brine and as a raw material for many industries, including a soda ash plant set up by AkzoNobel in 1940. Salt from Khewra mine is also used to make decorative items like lamps, vases, ashtrays and statues,] which are exported to the United States, India and many European countries. The use of rock salt to make artistic and decorative items started during the Mughal era, when many craftsman made tableware and decorations from it. Warth introduced the use of a lathe to cut out art pieces from the rock salt, as he found it similar to gypsum in physical characteristics.

In 2008 the Government of Pakistan decided to sell off seventeen profitable organizations including Khewra salt mines, but the plan was shelved. The mine is now operated by the Pakistan Mineral Development Corporation, a government department.